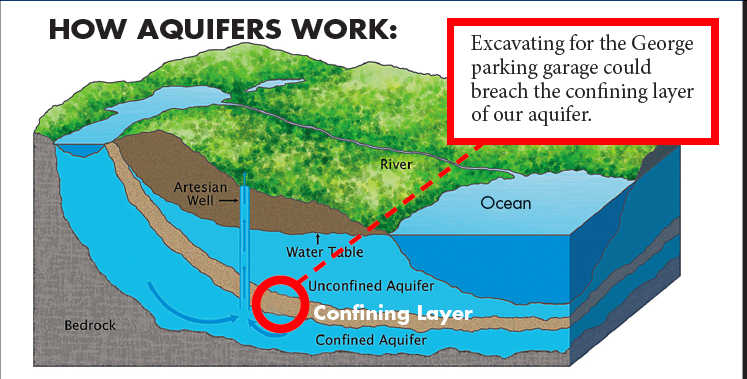 As you know, Gibsons Alliance of Business and Community is a strong advocate for aquifer protection. One of the main concerns we have with the George hotel is the serious threat it poses to Gibsons Aquifer.

The Gibsons Official Community Plan clearly states that a hydrology study must be carried out before any development can take place on the proposed development site. The application for the George was first submitted in February 2013. By December 2013, nine months later, the developer had still not had a hydrology study done.

So, in early January 2014 GABC sought help from an expert.

We asked a highly qualified engineer to review all the information provided by the proponent (see ToG website) in conjunction with the aquifer mapping final report to determine if excavation for the proposed development would breach the aquifer. The review concluded “…it is highly likely that…the proposed excavation will penetrate about 14 feet into the aquifer in the northwest corner of the site...and into the aquifer at the northeast corner, but to a lesser extent.”

On Wednesday, February 19th, we submitted this review document via email to Mayor J. Wayne Rowe, Gibsons Council, and senior staff at the Town of Gibsons asking the Town to “include this email and the attached letter as correspondence on the February 25th, 2014 Committee of the Whole meeting agenda…(as) technical information, which we feel staff and the elected people have a responsibility to consider, at this time.”

On Thursday, February 20th, we received an automated reply from the Town ignoring our request and stating: “A Public Hearing would provide a final opportunity to provide any additional comments with regards to the George Hotel application”(email correspondence attached). Later that afternoon (before the deadline for agenda submissions), Councillor Bouman sent an email request to the Corporate Officer asking that this item be placed on the agenda.

But as of Tuesday, February 25th, this item was not included on the Committee of the Whole meeting agenda.

Why is the Town of Gibsons suppressing an expert opinion that shows the George Hotel will put the Gibsons Aquifer at risk?